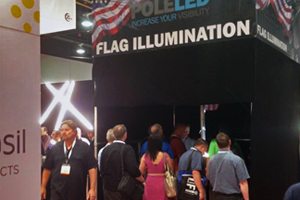 3, 4 and 5 June LIGHTFAIR International 2014 took place in Las Vegas. Just like during Light + Building 2014 PoleLed was present with its own stand and we would like to thank everyone for this nice and interesting trade fair. We received many positive reactions.. The PoleLed flag lighting was three days rely on massive attention from the visitors.

It was the first time that the PoleLed Basic and Extended PoleLed were seen on a fair outside Europe. The flag lighting fixtures are available in the United States and Canada soon.